Best Treks To Do in Ladakh 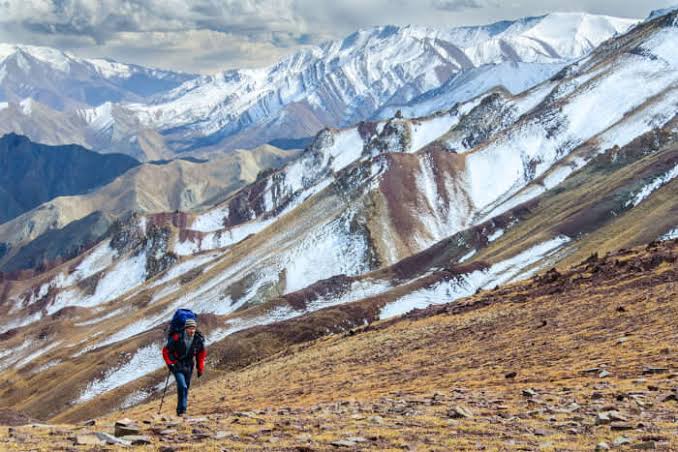 One of the worldwide famous treks resides in the cold high-altitude deserts of Ladakh. The name Chadar refers to its resemblance to a white blanket of snow which covers the Zanskar River. The unique trail of Chadar lets the trekkers walk on the river that has an upper frozen layer and you can see the river flowing beneath that layer. One of the major highlights is the Nerak Waterfall on the trail of Chadar Trek. It is a 56 feet high frozen waterfall with a tint of blue. As Chadar trek requires Zanskar river to be frozen, this trek can only be done in the winter months and temperature can dip as low as -25 degree Celsius at night time.

We valley is yet another popular trek in Ladakh that gives you a view of the Hemis National Park. On your trail you will cross many passes, beautiful landscapes, dark valleys, snow covered mountains and water streams. If Chadar trek is too much for you, then you can get an experience of walking on the frozen river of Markha if you are lucky enough. The campsites are stunningly beautiful with varied landscape, especially the highest campsite of Niamling with the overall view of the Zanskar range. You will also get a chance to visit the popular Hemis and Thiksey Monasteries and you can plan your trek in accordance with the great Hemis Festival.

Kang Yatse trek can be considered as an extension of Markha Valley trek from Niamling.Kang Yatse is a mountain summit climb at a dizzying height of 20,000 ft above the sea level. Not many trek routes offer a summit trek at such a daunting height. Once you reach the top, it feels like you have unlocked the bird’s eye view of the surroundings and you can clearly see the Zanskar river and Tibet from the top. The trail to descend afterwards is equally thrilling with passing the valleys and deep dark gorges through Kongmaru La.

Digar La Trek is a hike through the pass that connects the Indus Valley and Nubra Valley. As Ladakh is mostly famous for Nubra Valley and its blue jewel of Pangong Tso Lake, on this trek you can tick off all the wonders of Ladakh in a single trip. It is a trek through the classics of Ladakh with arid regions and wildlife sightings with spectacular views. You will also come across the stunning sight of Karakoram ranges on your trail. Camping in the starry night-sky is yet another incredible experience for the stargazers and you can also witness the shooting stars.

Sham trek with its 3-days itinerary is one of the short treks in Ladakh and it is often called as ‘baby trek’ of Ladakh. However, the range of nature’s vistas are nothing short of beautiful landscapes. Being one of the easier trekking trails in Ladakh, Sham Valley trek has gained its popularity and is frequented by the visitors throughout the year. If you are new to the trekking world but want to go on an adventurous ride in the topography of Ladakh then Sham valley is just the place to start with.

Set in the environment of Hemis National Park in the high-altitude region of Ladakh to spot the rare snow leopard, this trek is perfect for everyone. May it be a wildlife photographer, nature enthusiasts or an adventure seeker, Snow Leopard trek offers everyone something to look forward to. However, this expedition requires you to be patient enough to lay in wait for the wildcat. Apart from the snow leopard, you can also spot many other rare species of the Ladakh wildlife such as blue sheep, Tibetan Yak, wolves and many others.

Nubra Valley is one of the remote regions of the Himalayas in Ladakh. It takes you through the Indus valley and then onwards to the Zanskar Valley. The humble villages of the Diksit look quite picturesque nestled among the valleys. The trek through Nubra Valley also goes through the Digar La pass which is at an altitude of 17,820 ft.

One of the best scenic treks on the map of Ladakh region is Tso Moriri trek that starts from Rumtse. You will traverse through valleys, passes and beautiful landscapes. The number of valleys like gorgeous Rupshu Valley, green Kyamar Valley, and famous Indus valley line up on the trail making it a beautiful experience.