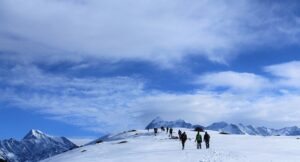 Hindu mythology claims that Lord Brahma, the creator, performed a hard devotion in the magnificent Brahmatal trek . Brahma Ji is supposed to have spent many years practising meditation here. As a result, it gave the site its name.

It is a well-known Himalayan trek because of the traversing through the dense forests that lead to meadows and uncovering secret waterfalls along the route that is approachable all year.

In January and February, the Brahmatal trek’s lush green glory turns sparkling white, providing an opportunity to photograph views of snow-capped peaks. Starting in Lohajung, the trek has four stops along the way at Bekaltal, Brahmatal, Tilbudi, and Wan.

Both new and seasoned trekkers will find the route to be suitable. Less risk of altitude sickness exists because the trek spends most of its time in wooded areas. The Brahmatal excursion is the epitome of excitement, taking you step by step to scenic views that are worth exploring once in your entire life.

The breathtaking sunset rays at Brahmatal Trek are among its outstanding features. Bekaltal and Brahmatal both established new benchmarks for sunsets, particularly between October and March. It is a visual pleasure to look out over the enormous Mundoli valley and the beautiful Kumaon and Garhwal range boundaries.

The Brahmatal trek can be visited through Rishikesh and Kathgodam. You can travel to Rishikesh by car or train and then take a bus or cab to Lohajung. The full trip’s day-by-day schedule is as follows:

After being picked up at the Kathgodam Railway Station, a drive to Lohajung will begin. The long journey should be worthwhile because of the scenic views of the mountains and streams.

Your journey to Bekaltal via Mandoli village begins from Lohajung. The four-hour hike will take you past oak and deodar trees. Tent camping at night.

Following breakfast, you set off on your hike to Brahmatal, which takes you through mesmerizing, lush, evergreen forests and lovely meadows. At a height of 3,400 meters, Brahmatal Lake can be found. Tenting for the night.

You reach Brahmatal Peak, where you will be greeted by one of the most incredible views of the Himalayas, particularly the Trishul and Nandaghunti peaks. Three hours separate the top from Daldum, where you will set up camp. tenting it up for the night.

You will drive back to Kathgodam, where you can take a bus or train to return home.

While the Brahmatal Trek is becoming more and more well-known, Jatropani Peak is largely unknown. A day’s climb separates Brahmatal Camping on the west slope from Jatropani Peak, which is 4071 metres high. If you are an experienced hiker, you can reach the peak of Jatropani Peak in the same six days as it takes to reach Brahmatal.

The view of the Himalayas from Jatropani Peak includes Chaukhamba, Neelkantha and Kamet.

From Brahmatal Top, the route to Jatropani Peak stretches to the grassy ridge to the west, then continues to reveal the rocky zone and climbs to Jatropani West Peak.

The highest peak In Brahmatal is Jatoparni Top, often referred to as Khamila Top. The Kumaon ranges’ Mrigthuni, Devtoli, and Maikoti peaks can be seen while trekking.

At Brahmatal Trek the only practical form of lodging is tent camping. Before beginning the trek, one can either bring their tent or hire one from any tour company. Please make sure you have enough sleeping bags and mattresses set up as well.

Only the food you bring with you can be eaten in excesses. Finding a local chef to travel with you on a group trip is advised so that he can make meals for you wherever you choose to set up tents for the night. You should bring some packed food with you so you can eat along the way. Keep in mind to bring your dishes.

With 4G internet, all major mobile networks are operational in Lohajung. No network will be available after Lohajung.

It is important to bring a knowledgeable tour guide with you on your Brahmatal trek.